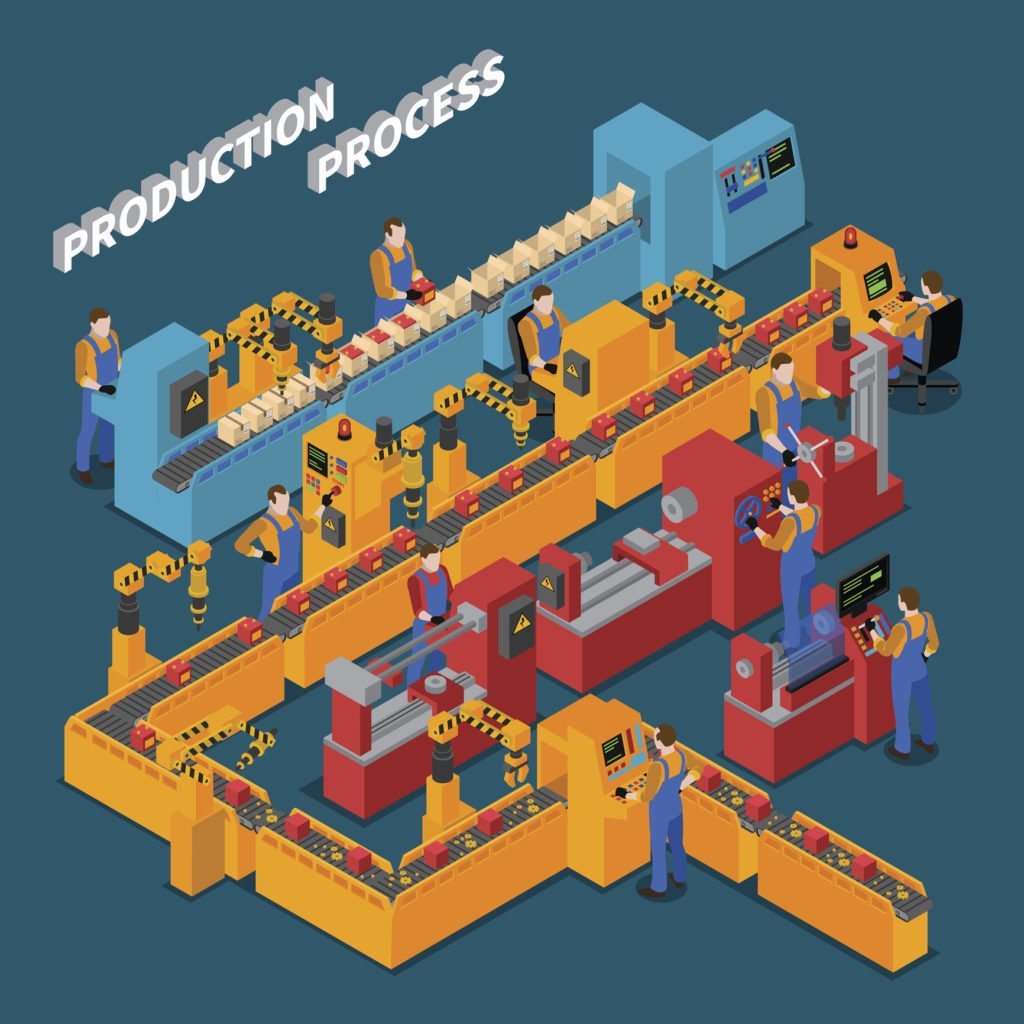 As CNC machine shop in Portland, our team at API/AMS owe a lot of our success to the history of assembly line work in the U.S. While the tools, technology, and techniques have changes remarkably over the last 150 years, manufacturing has its roots firmly established in this innovation.

The assembly line has long been considered one of the greatest innovations of the 20th century. It so dramatically changed the world of industry that business that failed to adopt the practice soon went extinct. Assembly lines also ranks as one of the primary factors that helped integrate the automobile into American society.

The Early Concept for the Assembly Line

Before the advent of the Industry Revolution, manufactured goods were typically made by hand with individual workers having a particular expertise when it came to creating one aspect of a product. Each expert would create his or her portion of the item using simple tools. Once each individual component was crafted they would all be brought together for the final product to be completed.

As far back as the 12th century workers in the Venetian Arsenal produced ships in a process that moved them down a canal where they were fitted with new parts at each juncture along the way. During its peak of production, the Venetian Arsenal could manufacturer a ship a day.

At the start of the Industrial Revolution, machines began to do work that once required a human to complete. By using machines, factories were able to spring up to replace small craft shops. This evolution was made possible in part by the concept of interchangeable parts, a revolutionary design from the mind of Eli Whitney.

The first example of interchangeable parts took root in the firearms industry when the French gunsmith Honore LeBlanc championed the idea of using standardized gun parts. Prior to this, firearms were made individually by hand, meaning that each gun was unique and could not be easily fixed if broken. Fellow gunsmiths began to realize the impact of LeBlanc’s idea could have on their own unique creations leading to resist to the adopting the practice. After all, if gun could be made without the specialized services of a gunsmith, why pay for the more expensive, less reliable alternative. However, another European craftsman by the name of Samuel Bentham had a similar idea, and used the concept of interchangeable parts in the production of wooden pulleys used in ships.

It wasn’t until Eli Whitney introduced the idea in the U.S. that the practice was widely adopted. Whitney was able to utilize standardized equipment and a large unskilled workforce to produce a large amount of identical gum parts at a cost far below the market price at the time, within a very short period of time. The process also made Whitney’s guns easier to repair and to find replacement parts.

In 1901, Ransom Olds created and patented the assembly line. By changing to this process, Olds was able to increase production at his car manufacturing plant by 500 percent after the first year. The plant could produce an unprecedented 20 units the Curved Dash model each day.

This level of cheap product allowed the Oldsmobile brand to market a style vehicle at a low price. Oldsmobile was the first massed produced car in the U.S., and the Olds’ assembly line method was not only the first to be used in the automotive industry, it also served as inspiration for method implemented by Henry Ford.

Henry Ford was able to successfully improve the assembly line concept by using the moving platforms of a conveyor system. In this type of system, the chassis of the vehicle was pulled along by a rope that moved the car station to station, allowing works to add parts as it moved along the assembly line.

Using this method, allowed Ford to create one Model T every 90 minutes, leading to a peak production of around two million cars in one year. Often credited as the father of the modern assembly line, Ford made an indelible mark on manufacturing in industry’s around the world.

Mass Production in the Robotic Age

Today, robotics is taking manufacturing and the assembly line into completely uncharted territory. Companies have begun developing robots that can work alongside of humans, helping to improve productivity and efficiency.

At our CNC machine shop in Portland, our team at API/AMS embraces the use of the latest technology in our manufacturing process. From quality management to precision machining, the use of robotics and advanced technology allows our machinists and unparalleled level of precision and craftsmanship.

While much is owed to manufacturing’s history, companies like API/AMS continue the proud tradition of the assembly line by forging new and exciting ways of improving this time honored and historic achievement.