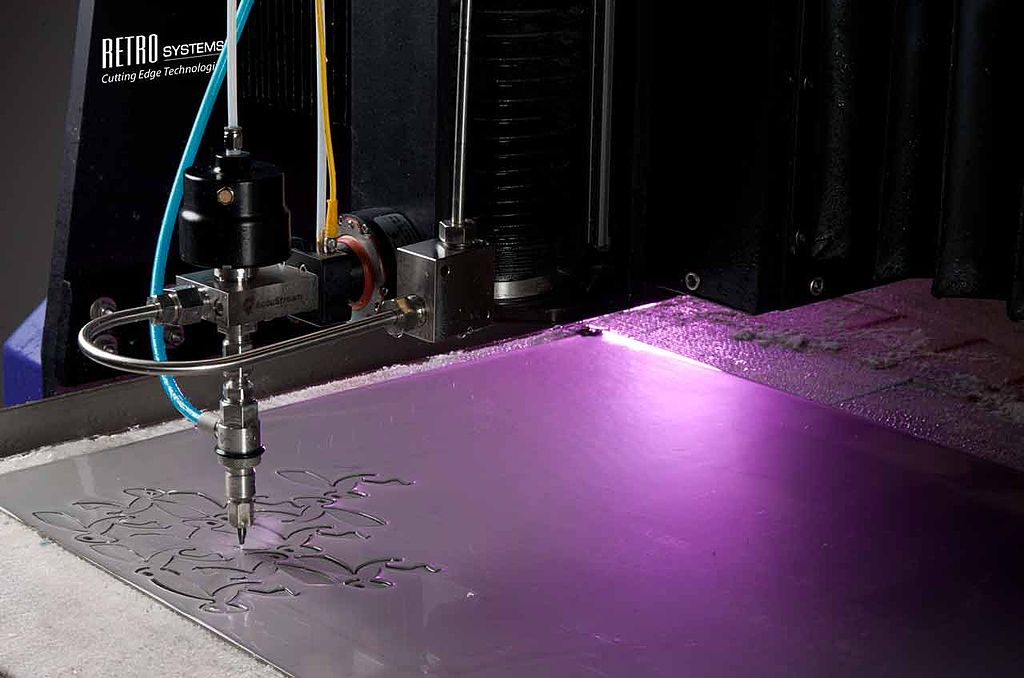 Using waterjets to cut things is not a new technology. In fact, the technology dates back all the way to the middle of the 1800’s when it was used commonly in hydraulic mining. However, you had to wait till the 1930’s before waterjets begin showing up in cutting devices used in commercial industries.

The Paper Patents Company, based in Wisconsin, is credited with developing a machine to meter, cut, and reel paper using a waterjet nozzle. This, and other first uses of waterjets, could only be used with materials that were soft, like paper. After WWII the technology for waterjets began to progress more rapidly all across the world. At Durox International in Luxembourg an employee named Carl Johnson created a way to cut plastic shapes with a thin stream of pressurized water, but the technique could still only cut into very soft materials.

It was not until 1958 when Billie Schwacha from North American Aviation used ultra high-pressure liquid to cut very hard materials. His initial system resulted in 100,000 psi (or 60 MPa), which could effectively cut through metal such as PH15-7-MO stainless steel. This process was used on the XB-70 Valkyrie, a deep-penetration strategic bomber prototype that could fly at over 2000 mph. The speed of the plane led to delaminating though, which meant the waterjet process had to further evolve to be more useful.

In 1963, Union Carbide experimented with waterjets that pulsed up to 50,000 psi for use in cutting stone and metal. Further studies and experimentation in the 1960’s and 1970’s expanded on the ideas for improving the waterjet stream of the nozzle and shrinking the nozzle so that it produced higher PSI. It was also discovered that you could lengthen the life of a waterjet by using treated water in commercial applications. By the 1980’s, abrasive waterjets found their way into industry using a mixture of water and an abrasive agent to help cut very hard materials. Abrasives are usually inert minerals like garnet, a twelve-sided crystal with a hardness of up to 8.5 on the Mohs scale (a diamond is 10 on the Mohs scale).

How A WaterJet Works

A basic waterjet works by pushing water through a small jeweled nozzle to keep the spray “coherent”. Many companies, like us here at API/AMS, prefer waterjets as they do not dull and will not overheat like a traditional metal cutter. Abrasive jets are preferred to cut the harder materials we come across, while plain waterjets are used primarily with softer materials. A computer controls today’s waterjet models, which allow a lot of flexibility in design. The latest machines can cut to within two thousandths of an inch, and have jet speeds over 2000 miles miles per hour, or around 80,000 psi.

If you need anything from a prototype part, to precision machined parts, to a large production run for any metal fabrication in Portland or the northwest area, API and AMS has the tools necessary to get your project done on time and on budget. Contact us today to learn more.