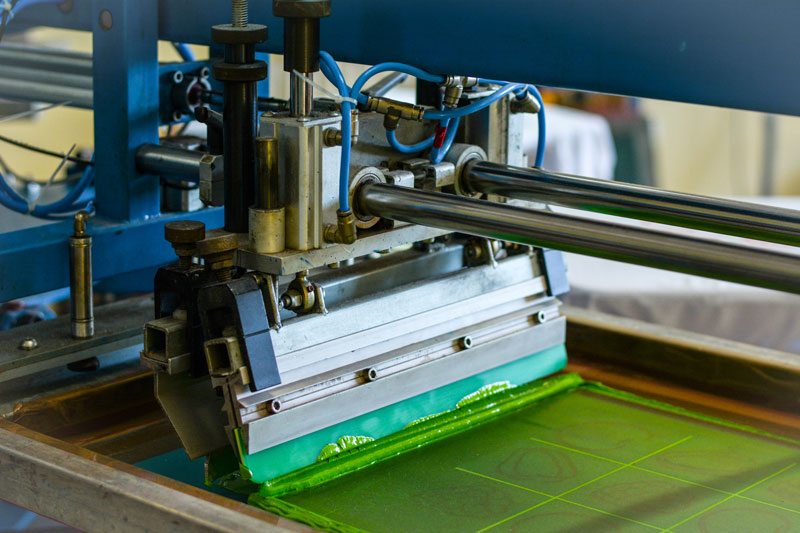 Screen printing, or silk screening, is another service that API/AMS proudly offers at our three Portland area API/AMS locations. We can help your business with single to multiple color screens and a variety of surfaces. With our in-house silk screening capabilities, graphic files can be easily imported to achieve a vast variety of screening needs. With API/AMS Portland silk screening services, we can apply ink on top of a finish like painted, powder coated, anodized or even stainless surfaces depending on your needs.

Screen printing goes way back to China in the 10th century where the Song dynasty (also known as the first to use paper money) was known to appreciate this early form of stenciling. Soon after, it appeared in other east Asian countries like Japan and Korea. One could say that stenciling with hand stencils has been around even longer though, up to 45,000 years , as many of the first human cave walls are decorated in this manner. Screen printing as we know it did not hit Europe until the late 1700s, but was not widely used due to the lack of the fine silk mesh needed to create them.

In the early 1900’s, an Englishman named Samuel Simon was the first to patent the technique of silk screening officially. His technique was used primarily to create fancy wallpaper using linen and silk for the upper class in Britain. It would take another decade for the process to evolve further, as a few printers are known to have tried using photo-reactive chemicals. These include “actinic light–activated cross linking or hardening traits of potassium, sodium or ammonium chromate and dichromate chemicals with glues and gelatin compounds” (“Screen Printing,” Wikipedia). Three early developers, Roy Beck, Charles Peter, and Edward Owens also had success using chromic acid salt sensitized emulsions for their use with photo-reactive stencils. In essence, they had created photo image stencils, but it would take the industry decades to come into common use.

Serigraphy to Warhol and T-Shirts

Soon after, in the 1930s, the term Serigraphy is used for those using silk or screen printing in artistic ways rather than industrial uses. Throughout the following three decades, silk screening rose in prominence from WPA posters and rising subcultures like the beatniks and hippies. It reached its apex when Andy Warhol famously screen printed Marilyn Monroe in bright pop tones in 1962. The sixties also gave rise to the rotary garment screen printing machine, which led to easy availability of custom t-shirts in the late sixties and is responsible for over half of all the screen printing done in this country today.

Nowadays, we can use many different fabrics and inks combined with sophisticated computer design technology to create screen prints of many colors and types. At API/AMS, we take care to use the latest screen printing technology to ensure the highest quality and quickest production for each and every one of our customers. If you need screen printing or silk screening in the Portland area, please give us a call and see how we can help.