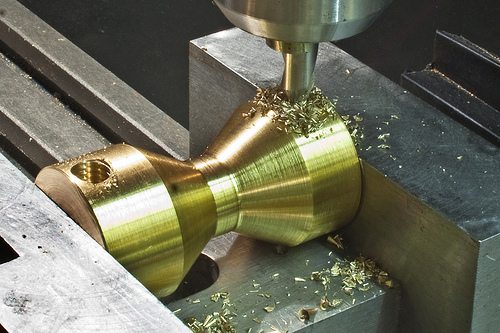 At American Precision Industries, we have long been fascinated with the history behind precision manufacturing. After all, precision machining in Portland is what we do. But to get a truly historic perspective of where the craft first started in the U.S. you need to pay a visit to the American Precision Museum, which is located in Windsor, Vermont.

Created under the goal of preserving the heritage of the mechanical arts, the American Precision Museum works to celebrate the ingenuity and accomplishments associated with the early pioneers of mechanical design. The museum is located in the Robbins & Lawrence Armory, which holds its own special place in both U.S. and precision machining history.

An Age of Machines

Visiting the museum allows visitors the opportunity to experience the early days of the Industrial Revolution by discovering the machines that have help create the world we know today. Back at the beginning of the 19th century, in the years between the American Revolution and the Civil War, a new industry began to emerge.

Today, we largely take manufacturing for granted. Our iPhones, automobiles, toasters and tools come streaming off manufacturing lines and into our homes with the greatest of ease. However, before the age of manufacturing truly began, mechanical devices were handmade in small numbers by highly skilled craftsman. This not only led to a shortage of goods, but the prices for these types of devices were far higher than the average American could ever hope to afford. (Imagine trying to by an iPhone that was handmade by Steve Jobs himself.)

Things would quickly change with the creation of the “American System” of manufacturing, which was based on precision measuring and mechanical invention. This new type of technology gave way to custom designed machine tools that enabled manufacturers to consistently create products of quality much faster and much less expensively. A wave of mass production would soon follow what this new type of technology helped pave the way for.

A Call To Arms

The Robbins & Lawrence Armory that houses the American Precision Museum illustrates the principle of how mass manufacturing helped shape the U.S. In 1845, the U.S. was on the brink of war with Mexico. To ensure the nation was welled prepared, the U.S. government issued a request asking for bids for 10,000 rifles that featured interchangeable parts – a feature that would provide the guns far more reliability, but would require a feat of engineering that would push the boundaries of what manufacturing could provide.

To answer the government’s call, a small gun store in Windsor, Vermont began developing and designing machine tools capable of producing precision gun parts. The owners of the small store create a new company, submitted their bid to the government and won the contract. Thus was born the Robbins & Lawrence Armory. The company not only produced the 10,000 riles, it successfully completed the contract well in advance of the delivery date, winning the company future government contracts. From this workshop, new ideas and designs spread across the country, and helped set the foundation for such companies as Jones & Lamson, Remington and Brown & Sharpe.

It’s clear that precision machining in Portland and other cities around the U.S. owe a great deal to these early forefathers of precision design. At American Precision Industries, we strive to carry on the high standards of quality, ingenuity and commitment shown by our industry’s forefathers. We take aim at making only the best products possible, and that will be true now and into the future.