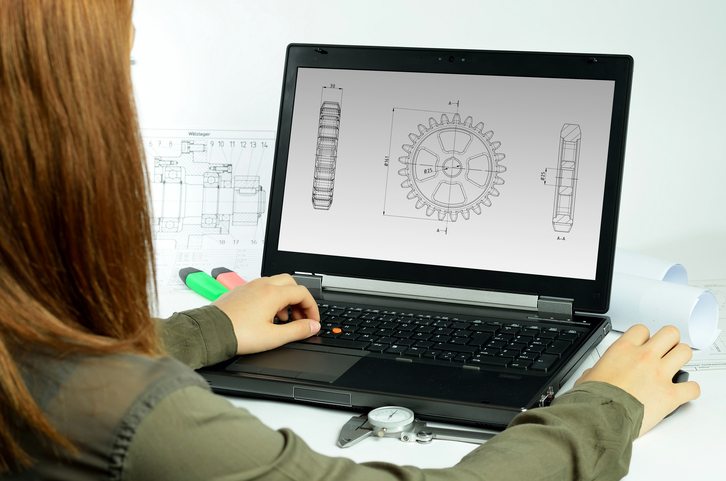 While we remain committed to using some of the most advanced precision machining technology at API, many outside of our industry may be surprised to learn that the computer-aided design (CAD) programs we use today have been the standard for more than a decade. Perhaps even more surprisingly, nearly all of these types of programs can be traced to work that began over 50 years ago.

Drafting and design in modern engineering can actually trace its development back to the discovery of description geometry during the 16th and 17th centuries. Drafting methods further developed with the creation of drafting machines, but the introduction of engineering drawings changed little in production until after World War II.

Throughout the war, a great deal of work was accomplished in the field of real-time computerization, especially at MIT, and by the 50s there were an entire group of people working on numerical control of machine tools and trying to find methods for automating engineering design. While many great minds applied themselves to this goal, it is the contribution of two in particular – Ivan Sutherland and Patrick Hanratty – who receive a lot of credit for establishing the foundation of what we now know as CAD.

The Birth of CAD

When it comes to the title of being the “father of CADD/CAM”, that largely goes to Hanratty. While at General Electric in 1957, Hanratty developed the Program for Numerical Tooling Operations (PRONTO), the first CMC programming system to be used commercially. By 1962, Sutherland had developed and presented his MIT Ph.D. thesis titled “Sketchpad, A Man-Machine Graphical Communication System.” Among the many points the thesis laid out was the first graphical user interface, using a light pen to design objects displayed on a CRT.

The rest of the 1960s brought additional developments, including the initial production of an interactive graphics manufacturing system and the use of the first digitizer. By the 70s, a growing list of companies was founded to commercialize their initial CAD program designs, including such luminaries as M&S Computing, Applicon, Computervision, and SDRC.

Throughout the rest of the 70s, research began to transition from 2D to 3D. Major breakthroughs included the work of Ken Versprille, whose Ph.D. thesis included the invention of NURBS which formed the foundation of modern 3D surface and curve modeling, and the development of Part and Assembly Description Language (PADL) by Ian Braid, Charles Lang, and Alan Grayer.

In the early 80s, UNIX workstations brought CAD systems such as CATIA and others to industries such as automotive, aerospace, and more. However, it was the introduction of the first IBM PC in 1981 that set the stage for the acceptance of CAD on a large, industrial scale. Just one year later, Autodesk was formed by a group of programmers, and AutoCAD, the IBM PC’s first major CAD program, was released in 1983.

The Revolution of CAD in Precision Machining

When it comes to the CAD’s evolution, the development of AutoCAD marks a significant breakthrough. The developers of AutoCAD wanted to deliver 80 percent of the functionality of other CAD programs currently on the market but at just 20 percent of the cost. Going forward, engineering and drafting became considerably more affordable, but largely in 2D models.

That dynamic changed in the late 80s with the release of Pro/ENGINEER, a CAD program that utilized solid geometry and feature-based parametric techniques for part assembly and defining. Pro/ENGINEER was used on UNIX workstations since PCs didn’t yet possess the processing power needed, but its release was felt industry-wide. The rest of the decade saw the development of a number of 3D modeling kernels, most significantly the Parasolid and ACIS, which would help to form the foundation for other parametric CAD programs.

By the 90s, PCs were now capable of performing the complex computations required to run 3D CAD programs. By 1995, SolidWorks was released around the same time as the first issue of Desktop Engineering hit newsstands. SolidWorks marked the release of the first major solid modeler for Windows, which was then followed by other programs such as Inventor and Solid Edge.

So while we always look toward the future of precision machining and CAD design at API, it’s important to occasionally look to the past and appreciate all of the hard work and design that help set the stage for the tools we use today.